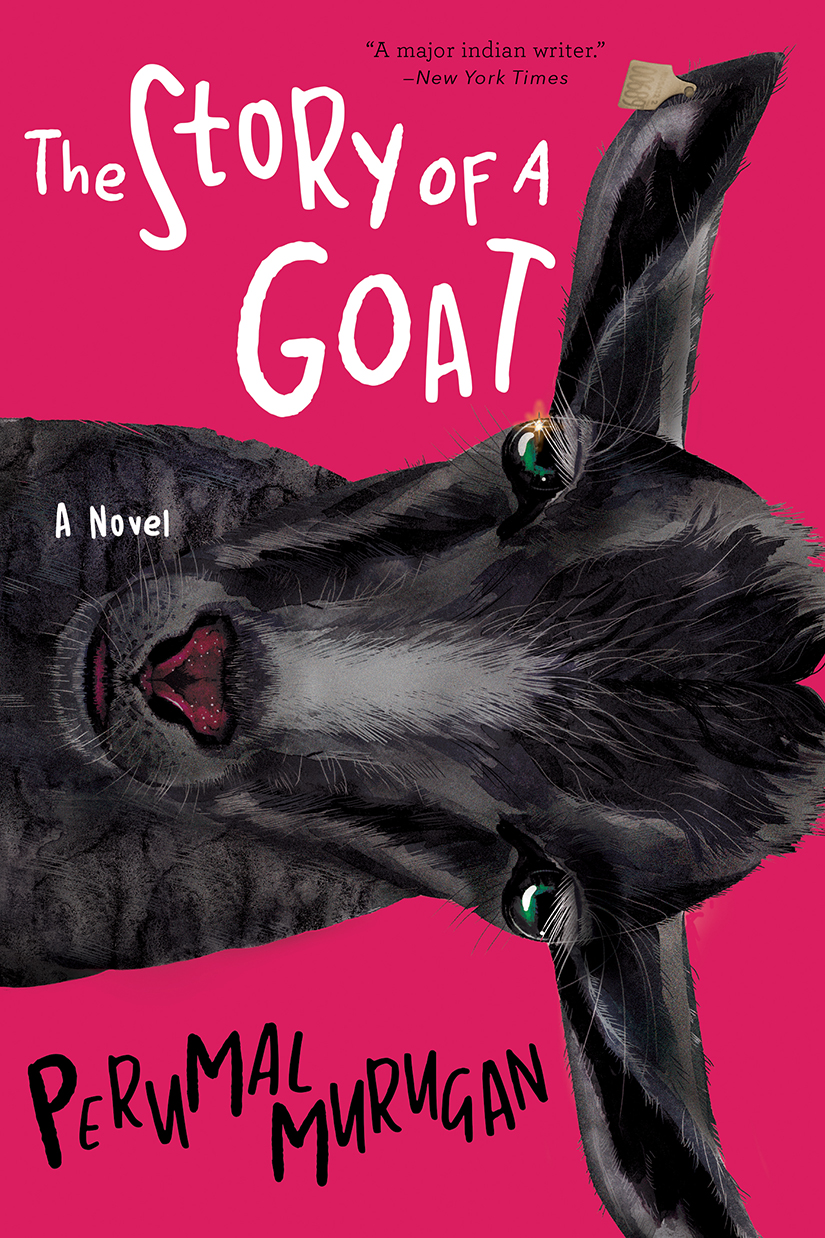 Poonachi
The Story of a Goat

A Provocative but Heartwarming Fable From a World-Class Storyteller Who Is Finally Achieving Recognition Outside His Home Country.

From one of India’s best-known writers and the author of the National Book Award-longlisted One Part Woman comes a charming and surprising tale of an orphaned goat and the family that decides to take care of her, despite the potential cost to them.

As he did in the award-winning One Part Woman, in his newest novel, POONACHI. The Story of a Goat, Perumal Murugan explores a side of India that is rarely considered in the West: the rural lives of the country’s farming community. He paints a bucolic yet sometimes menacing portrait, showing movingly how danger and deception can threaten the lives of the weakest through the story of a helpless young animal lost in a world it naively misunderstands.

As the novel opens, a farmer in Tamil Nadu is watching the sun set over his village one quiet evening when a mysterious stranger, a giant man who seems more than human, appears on the horizon. He offers the farmer a black goat kid who is the runt of the litter, surely too frail to survive. The farmer and his wife take care of the young she-goat, whom they name Poonachi, and soon the little goat is bounding with joy and growing at a rate they think miraculous for such a small animal. Intoxicating passages from the goat’s perspective offer a bawdy and earthy view of what it means to be an animal and a refreshing portrayal of the natural world. But Poonachi’s life is not destined to be a rural idyll—dangers can lurk around every corner, and may sometimes come from surprising places, including a government that is supposed to protect the weak and needy. Is this little goat too humble a creature to survive such a hostile world?

»A classic Perumal Murugan novel, empathetically illuminating lives of quiet dignity overrun by subjugation and hardship . . . He effortlessly evokes the sights, sounds and smells of [Tamil Nadu] . . . Its quiet reservoir of empathy and fortitude is slowly unraveled.«
Mint

»Fantastical . . . Through the thoughts of a rare black goat and the couple who adopt it, readers witness famines, death, and moments of beauty.«
National Geographic

»A significant novel of its time, Poonachi is a slow burn that pulls you in, bemuses and frustrates you before convincing you to commit to it . . . It captures in poignant, satirical strokes the relentless sense of the survival of both animal and human life in circumstances that conspire to eliminate them«
India Today

»A commentary on the human condition, and on the vulnerabilities of the artistic life.«
Forbes India

»Through the eyes of this miraculous creature, we are taken through rural India. But it’s not all sunshine-filled romps in the field. Perumal Murugan also gives us a glimpse at the nuances of class in this community from a unique and charming perspective. It’s a joy.«
Literary Hub

»A narrative that goes beyond the humanistic toward a broader sense of universal empathy. Intimate and realistic in certain areas and mythic in others, this one might surprise you.«
Words Without Borders

»You sense a fund of deep wisdom about the vagaries of the rains, politics, animal and human behavior. Chekhov once said that anyone could write a biography of Socrates, but it takes skill to tell the stories of smaller, anonymous lives. Murugan shows us that there are no small lives.«
New York Times

»This slyly fabulist story inhabits the point of view of a sickly goat taken in by a poor Indian family. Murugan, whose novel One Part Woman was longlisted for a National Book Award for translation, fashions the goat’s travails and victories into social commentary and a testament to nature’s power.«
New York Times Book Review

»This fable of society, bureaucracy, and rural life centers on a Tamil farming couple in South India and the female goat they receive from a mysterious man. The boundaries between human and animal consciousness are blurred as the frail foundling matures under the couple’s care, encountering maternal bliss and heartbreak. The small triumphs and tragedies of rural life, such as drought, material wealth, and run-ins with a comically inefficient provincial government, are relayed through the goat’s trenchant observations, which poignantly expose how tightly the lives of caretakers and their livestock are bound.«
The New Yorker

»Perumal Murugan said his career as a novelist was dead. Lucky for us, he was wrong (...), POONACHI. The Story of a Goat jumps nimbly from fantasy to realism to parable (...). The effect is not so much escapist fantasy as an existential reflection (...) The elegance of Murugan’s simple tone will lull you deeper into his story (...) The early scenes of tiny Poonachi wandering in the field and cavorting with other goats are as soft as cashmere (...) Woven through this slim novel is an acidic satire (...) As POONACHI. The Story of a Goat demonstrates, just because we’ve put away childish things doesn’t mean we have to deny ourselves the strange pleasure of fiction in which animals articulate their own curious perspectives on their lives - and ours.«
Washington Post

»[A] parable about village life, written with breathtaking and deceptive simplicity ... Murugan traces the entire life of his little goat — her despair, her small acts of heroism, her longing — with Chekhovian clarity. Each sentence (...) is modest, sculpted and clean, but behind each you sense a fund of deep wisdom about the vagaries of the rains, politics, behavior, human and animal.«
New York Times

»The title character of Murugan’s elegant new novel is indeed a joy (...) Murugan’s marvelously observant narrative is equally interested in the visceral daily life of a farm creature (...)The greatest achievement of this remarkable novel is the empathy its adult readers will feel for a non-human creature; through Poonachi’s tale we are reminded how much bonds us with the animal world.«
USA Today

»This is in part a political allegory about an oppressive state and the impermeable barriers of caste and class, but it is written with much more tenderness than what George Orwell summoned up in Animal Farm.«
The Hindu

»A goat’s life serves as an allegory for the human condition in this novel from an acclaimed Indian author (...) In anthropomorphizing Poonachi, Murugan finds a path to describe the essence of humans’ struggle to survive while grasping for fleeting moments of joy and grace . . . In the tradition of George Orwell’s Animal Farm . . . An affecting modern fable reflecting Murugan’s enchanting capacity to make a simple story resonate on many levels.«
Kirkus Reviews (starred review)

»This superbly fabulist tale from Murugan dives into the inner life and turmoil of a Asuras, a fictional farming village in rural India, through a small but determined goat and her unlikely caretakers (...) Murugan explores the lively inner life of an observant goat in this imaginative exploration of rural life under the caste system.«
Publishers Weekly

»Funny and warm, POONACHI is a book that forces us gently to look at ourselves and our contribution to an unequal world. Perumal Murugan is a master storyteller who reflects profoundly on our transactional society and its inequities and struggles. Through the character of the lonely goat, he has written a powerful modern fable.«
JCB Prize for Literature, The Jury

»In Poonachi, Murugan collapses the worlds of the humans and the goats. Each mirrors the other and is inextricably intertwined. There is a lot of sociological, geographical detailing that Murugan does to bring these worlds alive, but it is the voice of an insider, recalling for himself what he has seen and how he has lived.(...) Poonachi and her foster parents, the old couple, will stay with us long after we finish reading their story.«
The Indian Express

»Murugan's sarcasm speaks of the robustness of his spirit ... As in all his novels, (his) story is rich in detail ... (He) sustains the narrative tension right from the start.«
The Hindu Literary Review

»[Perumal Murugan] may, in fact, soon emerge as the most celebrated Indian writer of our times.«
India Life and Times

»Perumal Murugan's Poonachi is a hard-hitting political novel crafted with the pragmatism of a survivor and the infinite tenderness of a poet.«
The Hindu Business Line

»A sly social satire through the tale of a black goat.«
Vogue India

»Masterly and nuanced, Perumal Murugan's tale forces us reflect on our own responses to hierarchy and ownership, selflessness and appetite, love and desire, living and dying. Poonachi is every woman at the bottom of every social, political and cultural ladder where she has no say in what she wants and believes and who must breathe with fear and the threat of violence. *****«
Books and Conversations

»A wholly human story wrapped up in the person of an orphaned black goat (...) As the story progresses, its sophistication and maturity more closely evoke Animal Farm (...) A frank exploration of oppression, greed, love, and what good can be made of even the most meager life.«
Shelf Awareness

»Moves fluidly between human and animal viewpoints, from detailing the humans’ relationship with their land and flock, to anthropomorphizing Poonachi’s maturation from fragile survivor into playful kid, longing lover, even miraculous mother. Yet as pastoral as this story seems, Murugan’s multilayered intentions prove far more admonitory (...) Beyond the fields, a regime looms, fear controls, and societal rigidity rules as Murugan adroitly transforms his caprine idyll into cautionary tale.«
Booklist

Perumal Murugan is one of India’s most well-known literary writers. He has written ten novels and five collections each of short stories and poetry. His best-known novel One Part Woman was longlisted for the inaugural National Book Award for Translation, and it won the prestigious ILF Samanvay Bhasha Samman for writing in Indian languages and the Translation Prize from India’s National Academy of Letters. 'One Part Woman', his best-known work, a powerful exploration of caste and identity as well as a moving story of love and family (in Tamil 'Madhorubhagan') has been a bestseller, having sold over 100,000 copies in India. It was shortlisted for the Crossword Award and won the prestigious ILF Samanvay Bhasha Samman. Perumal Murugan's works have won critical acclaim and earned him several national Awards.