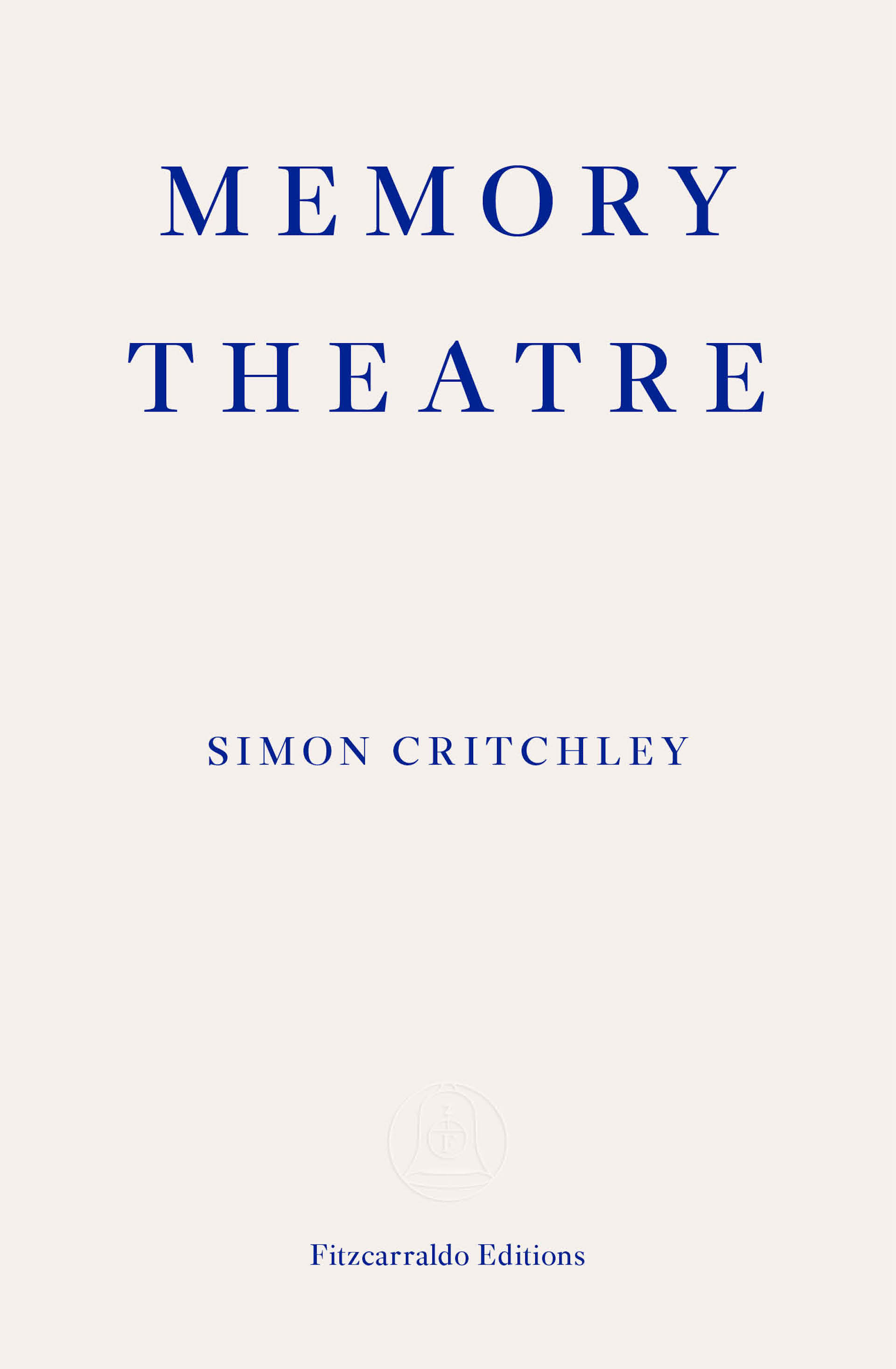 When a French philosopher dies, a fictional Simon Critchley discovers an unpublished work of his predicting the deaths of various philosophers. One of them is Critchley himself.

A French philosopher dies during a savage summer heat wave. Boxes carrying his unpublished miscellany mysteriously appear in Simon Critchley's office. Rooting through piles of papers, Critchley discovers a brilliant text on the ancient art of memory and a cache of astrological charts predicting the deaths of various philosophers. Among them is a chart for Critchley himself, laying out in great detail the course of his life and eventual demise. Becoming obsessed with the details of his fate, Critchley receives the missing, final box, which contains a maquette of Giulio Camillo's sixteenth-century Venetian memory theatre, a space supposed to contain the sum of all knowledge. That's when the hallucinations begin...

»MEMORY THEATRE is a brilliant one-of-a-kind mind-game occupying a strange frontier between philosophy, memoir and fiction. Simon Critchley beguiles as he illuminates.«
David Mitchell, author of 'The Bone Clocks'

»Simon Critchley is a figure of quite startling brilliance, and I can never guess what he'll do next, only that it is sure to sustain and nourish my appetite for his voice. His overall project may be that of returning philosophical inquiry, and "theory", to a home in literature, yet without surrendering any of its incisive power, or ethical urgency. ... I read MEMORY THEATRE and loved it.«
Jonathan Lethem, author of 'Dissident Gardens'

»MEMORY THEATRE is a dense, thoughtful work that finds innumerable ways to surprise its readers and force them to interrogate their own assumptions. It balances what amounts to a philosophical essay with a narrative frame and elements of memoir, operating on a plane that takes the strengths of each genre and leaves their weaknesses behind. All of this, too, in a book one could finish on a short flight, though it'll hang around in its readers' brains for much longer than that.«
The Los Angeles Review

»This is a remarkable [fiction] debut: rich, profound and clever, but not oppressively so, and often very funny.«
Nicholas Lezard, Guardian

»The book's plot is pure Umberto Eco, but radiacally foreshortened... Over 60 or so pages, Critchley has a good deal of metaphysical fun with the history of the memory theatre and its apparent influence on Shakespeare and Hegel, among others. Readers of ON HUMOUR (2002), (2009) or THE HAMLET DOCTRINE (2013) will recognise the trademark Critchley swerve from philosophical abstraction to personal or pop-culture reference points.«
Brian Dillon, ArtReview

»Simon Critchley's work manages the difficult task of drawing both accessibility and depth from his vast range of references.«
The Quietus

»The significance of voice animates much of Critchley's writings on philosophy, literature, and art, which have long been concerned with the interplay of life and thought as well as author and text; indeed his THE BOOK OF DEAD PHILOSOPHERS, which reads thinkers through their diverse circumstances of demise, is a particularly committed and comical take. "Who speaks?" again emerges as the central question of his most recent work, MEMORY THEATRE, a short volume described variously as memoir, philosophy, novella, and even science fiction. ... Throughout, the text spins multiple plates, providing a fascinating history of memory theaters, a hopscotch through Western philosophy, and a narrative structure owing a bit to both Raymond Chandler and Philip K. Dick (or, more precisely, "a movie adaptation of a Philip K. Dick short story", as the narrator himself points out).«
Nova Benway, BOMB Magazine

»A strange, affecting and stimulating book that's both a philosophical history and a personal memoir. Sifting through the archives of a dead friend, Critchley takes a fascinating journey through the philosophy and history of memory, and the technologies of remembering dreamed up by thinkers since classical times.«
Hari Kunzru, author of 'Gods Without Men'

»With a sense of mischief combined with surprising reverie, Simon Critchley has braided together ideas about memory from the past with the latest thinking about unreliable narrative, altered states and the mysteries of consciousness. MEMORY THEATRE is a tantalising, textual Moebius strip - philosophy, autobiography, and fiction twisted together.«
Marina Warner, author of 'Stranger Magic'

»Novella or essay, science fiction or memoir? Who cares. Chris Marker, Adolfo Bioy Casares and Frances Yates would all have been proud of having written Memory Theatre.«
Tom McCarthy, author of 'C'

Simon Critchley is Hans Jonas Professor of Philosophy at the New School for Social Research in New York. His previous books include ON HUMOUR, THE BOOK OF DEAD PHILOSOPHERS, HOW TO STOP LIVING AND START WORRYING, IMPOSSIBLE OBJECTS, THE MATTERING OF MATTER (with Tom McCarthy), THE FAITH OF THE FAITHLESS, STAY, ILLUSION!: THE HAMLET DOCTRINE (with Jamieson Webster) and BOWIE. He is a series moderator of 'The Stone', a philosophy column in The New York Times, to which he is a frequent contributor.