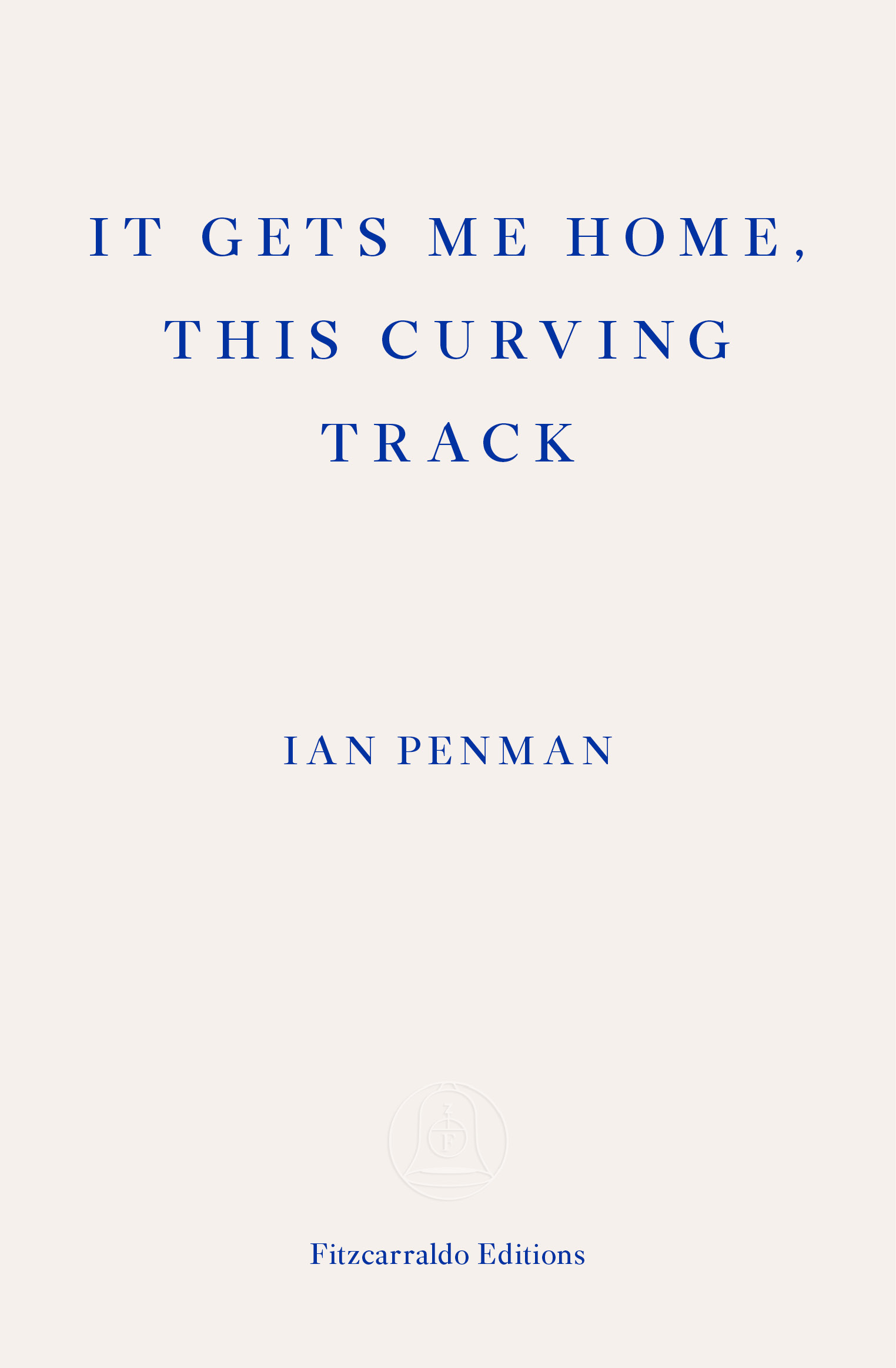 It Gets Me Home, This Curving Track

The monuments of popular music. In a superb collection by the renowned critic Ian Penman.

When all else fails, when our compass is broken, there is one thing some of us have come to rely on: music really can give us a sense of something like home. With IT GETS ME HOME, THIS CURVING TRACK, legendary music critic Ian Penman reaches for a vanished moment in musical history when cultures collided and a certain kind of cross-generational and ‘cross-colour’ awareness was born. His cast of characters includes the Mods, James Brown, Charlie Parker, Frank Sinatra, Elvis Presley, John Fahey, Steely Dan and Prince – black artists who were innovators, and white musicians who copied them for the mainstream. In ‘prose that glides and shimmies and pivots on risky metaphors, low puns and highbrow reference points’ (Brian Dillon, frieze), Ian Penman’s first book in twenty years is cause for celebration.

»The eight pieces have a depth and expansiveness that transcend their origin as book reviews, several of them cannily commissioned by someone at the London Review of Books who saw his potential as a long-form essayist. ... What gets us home, as it were, is Penman’s verve, and his eagerness to make us listen to the records as attentively as he does. ... his essays on James Brown, Charlie Parker and Prince aren’t definitive; they are only inimitable.«
The Guardian

»It is the echoes of that spiritual gamble, and the wealth of secret knowledge attained in that arduous rite of passage, that resonate throughout and make it such an essential read.«
The Observer

»Penman’s subjects are a canny mixture of legend (James Brown, Charlie Parker, Frank Sinatra, Elvis, Prince), fascinating outlier (John Fahey, Steely Dan’s Donald Fagen), and movement (an unflinching unpicking of the continuing Mod revival). Many of these figures have been done to death, of course, but Penman confronts the spectre of biography-overload by referencing key works he admires, and some he doesn’t, fusing his own arguments with other writers’ missteps or apparent lapses in taste. It’s a tactic that benefits the reader, casting light on differing viewpoints and, as evidenced by both a bibliography and ‘discography/mood map’, signposting further recommended reading. ... a book that so artfully marries history and criticism emerges as a joyous celebration of the complex act of writing about music.«
The Quietus

»A stylish collection.«
FINANCIAL TIMES round up of the Best Books of 2019

»These are essays about music but also about life and our life blood: engaging, thought provoking, and deeply knowledgeable. One for those who like to think about music.«
NBmagazine

»Ian Penman is an ideal critic, one who invites you in, takes your coat, and hands you a drink as he sidles up to his topic. He has a modest mien, a feathery way with a sentence, a century’s worth of adroit cultural connections at the ready, and a great well of genuine passion, which quickly raises the temperature. Penman writes about the monuments of popular music as if he had a personal stake in them – which of course he does.«
Luc Sante, author of The Other Paris

»Ian Penman – critic, essayist, mystical hack and charmer of sentences like they’re snakes – is the writer I have hardly gone a week without reading, reciting, summoning to mind. The writer without whom, etc. ... I was 15 when I first read Penman, and practically all I thought about was music. After Penman, I thought about language, too. About the ways a young life might be diverted by the wrong words, the wrong metaphors – how you might find the right ones in a stray song lyric or the corner of a magazine page. ... The writing is frequently something entirely else: decades of love and listening translated into prose that glides and shimmies and pivots on risky metaphors, low puns, highbrow reference points. ... I wouldn’t have written a word without the dream, ghost, echo of his writing.«
Brian Dillon, frieze

»Writing about music can often be a joyless and rather sterile exercise in point-scoring, fact-shaming and imposition of the party line, but rather than engage in musical vivisection, Ian Penman’s mercurial, teasing, provocative prose presents him as a tap dancer – one who happens to use his fingers instead of his feet, and a keyboard instead of a sprung floor. Whether you agree with everything he says is beside the point. What matters is that he aspires to make the same shapes and rhythms on paper as his subjects do with particles of air.«
Will Ashon, author of Chamber Music

»Penman is not only adept at what the Frankfurt musicologist Theodor Adorno called 'structured listening', the ability to hold the totality of a musical work in mind while being minutely aware of its details at the micrological level, he is also acutely proficient at the sympathetic tone. The subjects of these essays may be consensual enough – Sinatra, Presley, James Brown, Charlie Parker, the Mods, and others – but there is not even a hint of playing to the crowd in their discussion. In this sense, it becomes genuinely beside the point whether the reader likes the artist in question or not, not because Penman takes anybody else's response for granted, but because there are always things to learn, to notice, to smile about, when one sets one's tribal affiliations to one side. ... These truly are essays that, as the writer hopes, will reward periodic revisits. As somebody once crooned, nobody does it better.«
Review 31

»How – in Penman’s words – to be serious without being pompous, how to be simultaneously complex and seductive, how to give a hint of your own flaws and passions without being boorishly or presumptively autobiographical: such are the struggles of the high-end essayist-reviewer, and the tension at the heart of Penman’s own pieces, since he started writing them, as a teenager, for the 1970s NME. The years have made his writing clearer, deeper, sadder, richer. This is a wonderful collection.«
Jenny Turner, author of The Brainstorm

»Written with love and joy and squirt gunner’s accuracy with the adjective.«
Nicholson Baker, author of U & I

»Ian Penman’s work has the tone, and the texture, and the complexities of the music and musicians he talks about, whether it’s Steely Dan laughing up their sleeves, the thorny declines of John Fahey and James Brown, or Elvis’s conflicted southern manners. It’s sharp and incisive but also full of love; it is beautiful writing.«
Bob Stanley, author of Yeah Yeah Yeah

»Consistently told me stuff I didn’t know about stuff I thought I knew. No other ‘music writer’ combines such lightness of touch with such depths of diving.«
John Jeremiah Sullivan, author of Pulphead

»It Gets Me Home, This Curving Track summons the lives and times of several extravagantly damaged musical geniuses and near-geniuses in (mainly) the brutal context of mid-century America – its racial atrocities, its venality, its murderous conformities. Ian Penman writes an exact, evocative prose as surprising as improvised jazz in its fluid progress from music criticism to social commentary to biography and back. He’s found a way to be erudite without pedantry, entertaining without pandering. His ear for mesmerizing nuance is unmatched by any music critic alive.«
Gary Indiana, author of Three Month Fever

»Ian Penman is popular music’s Hazlitt – its chief stylist – and his sound is often equal to what he writes about. Each of his essays is an event, so this book is indispensable.«
Andrew O’Hagan, author of The Secret Life

Ian Penman is a British writer, music journalist, and critic. He began his career at the NME in 1977, later contributing to various publications including The Face, Arena, Tatler, Uncut, Sight & Sound, The Wire, the Guardian, the LRB, and City Journal. He is the author of Vital Signs: Music, Movies, and Other Manias (Serpent’s Tail, 1998).