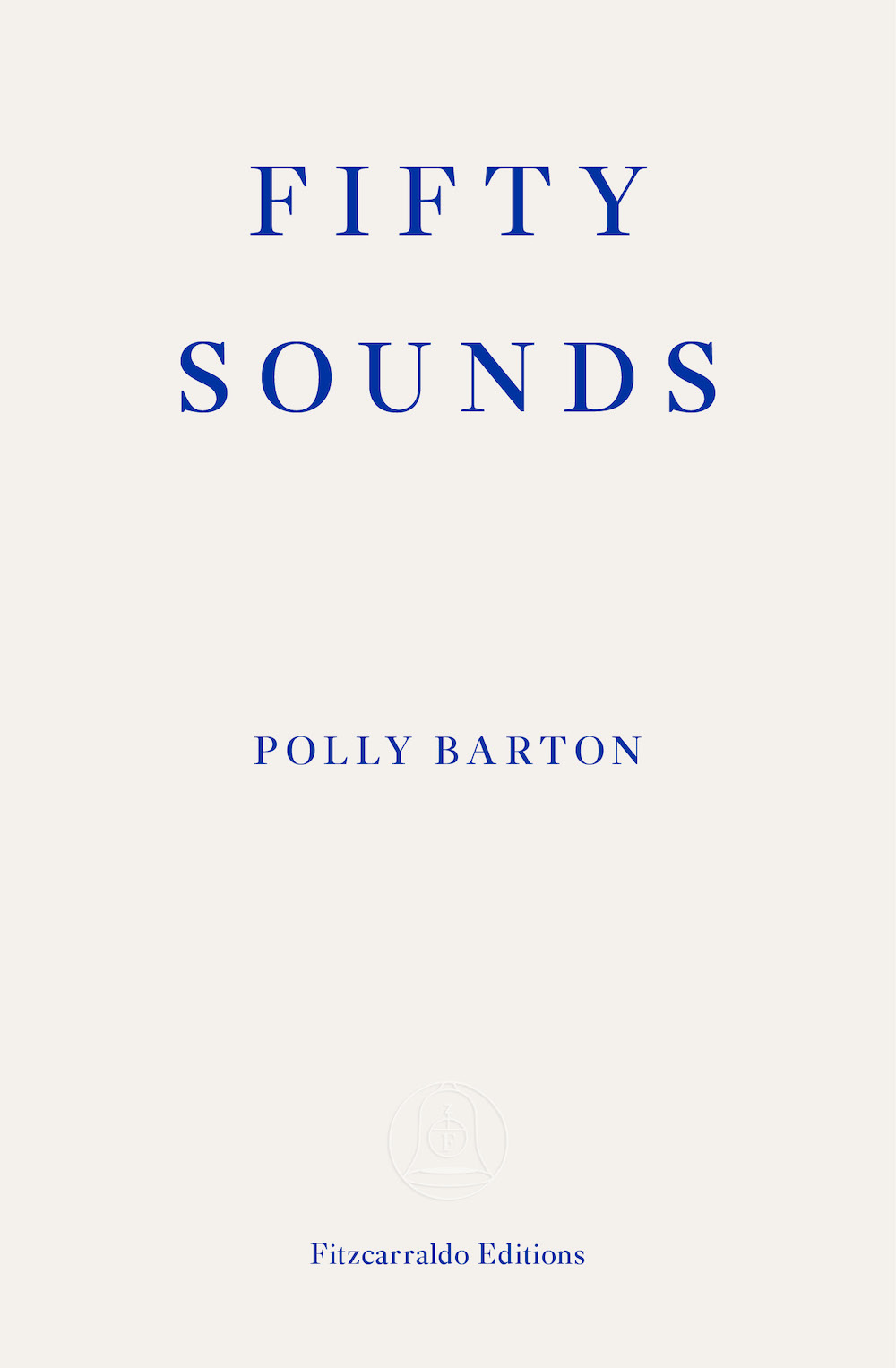 Why Japan? In Fifty Sounds, winner of the 2019 Fitzcarraldo Editions Essay Prize, Polly Barton attempts to exhaust her obsession with the country she moved to at the age of 21, before eventually becoming a literary translator. From min-min, the sound of air screaming, to jin-jin, the sound of being touched for the very first time, from hi’sori, the sound of harbouring masochist tendencies, to mote-mote, the sound of becoming a small-town movie star, Fifty Sounds is a personal dictionary of the Japanese language, recounting her life as an outsider in Japan. Irreverent, humane, witty and wise, Fifty Sounds is an exceptional debut about the quietly revolutionary act of learning, speaking, and living in another language.

»Polly Barton is a brilliant, learned and daring writer and Fifty Sounds is a magnificent book. Through her eddying philosophical vignettes, Barton creates a unified work of extraordinary wisdom and vitality.«
Joanna Kavenna, author of Zed

»Fifty Sounds explodes the redundancy of the phrase “I’m learning a language,” showing us that the experience is more akin to relearning reality and who we are in it. Barton writes of being “souped” in the sounds of speech and a new place, but also in what is not said or written. She beautifully recreates the monumental intuition and exposure required to immerse oneself in a new mode of living, and the quantum levels of attention required to translate literature. It chimes and charms, a resounding wonder about identity, communication and love.«
Jen Calleja, author of I’m Afraid That’s All We’ve Got Time For

»Barton is a lively, inquisitive writer, and her first book is a warm and eye-opening account of the precarity of human communication.«
New Statesman

»It seems fitting, somehow, that this marvelous study of the expansiveness and precarity of human communication is so woefully ill-served by a literal description of its contents. As in all great works of genreless non-fiction, all of the subjects Fifty Sounds is putatively “about” – Japan, translation, the philosophy of language – are inspired pretexts for the broad-spectrum exercise of an associatively vital and thrillingly companionable mind. This is a gracious, surprising, and very funny debut from a writer of alarming talent.«
Gideon Lewis-Kraus, author of A Sense of Direction

»Fifty Sounds demonstrates Barton’s belief that to understand another language – to really, truly, get it – she had to immerse herself within it, building up a library of sensual associations to draw on. Every adventure she has – culinary, sexual, or emotional – adds to the depth of her vocabulary.The book is testament to the thoughtfulness that goes into translation: the weight of choosing one phrasing over another. (...) Fifty Sounds is a delightful, granular account of communicating across languages.«
The Scotsman

»Witty, exuberant, also melancholy, and crowded with intelligence – Fifty Sounds is so much fun to read. Barton has written an essay that is also an argument that is also a prose poem. Let’s call it a slant adventure story, whose hero is equipped only with high spirits, and a ragtag band of phonemes.«
Rivka Galchen, author of Everyone Knows Your Mother Is a Witch

»This must be the first time I’ve been certain I was going to love a book before I’d even finished reading the contents pages, and Fifty Sounds totally sustains that early promise. I’ve never read a more revealing or thrilling exposition of the ways encountering and befriending a new language aren’t simply a mechanical process, but an unlikely experience of circumstance and relationships, a learning experience that is not just rationally developed, but viscerally lived.«
Daniel Hahn, translator of José Eduardo Agualusa and winner of the IMPAC in 2017

»It’s one of those books that fizzes with energy.«
Toast Magazine

»This book: a portrait of a young woman as language-learner, as becoming-translator, as becoming-writer, in restless search of her life. It is about non-understanding, not-knowing, vulnerability, harming and hurt; it is also about reaching for others, transformative encounters, unexpected intimacies, and testing forms of love. It is a whole education. It is extraordinary. I was completely bowled over by it.«
Kate Briggs, author of This Little Art

»I loved this book and learned a lot from it, especially about subjects I thought I knew about – place, displacement, language-doubles and the double-selves we have when we move between our languages. It’s not just just that it’s winningly-written, insightful and formally exciting, though that would be enough. It’s that it’s genuinely gripping: forthright, inventive, personal, and fizzing with ideas«
Patrick McGuinness, author of Other People’s Countries

»Both memoir and cultural study, FIFTY SOUNDS is the record of Barton’s attempts to grapple with the Japanese language...Like falling in love itself, the experience of learning Japanese...is intimate, humorous and painful. Ultimately, Barton reflects, language-learning is “the always-bruised but ever-renewing desire to draw close”. Barton’s centring of doubt in her narrative – doubt about her linguistic skills; doubt about her relationships with people she meets, and with the country itself – brings nuance to her account of learning a language outside the classroom.«
Times Literary Supplement

Polly Barton is a translator of Japanese literature and nonfiction. Born in London in 1984, she studied philosophy at Cambridge before traveling to Japan. She holds a MA in the Theory and Practice of Translation from SOAS, University of London, and was awarded first prize in the inaugural JLPP Translation Competition for her translations of Natsuki Ikezawa and Kobo Abe. Recent and forthcoming translations include short stories by Aoko Matsuda and Naocola Yamazaki, a novel by Sawako Ariyoshi, and various nonfiction projects. Polly Barton won the 2019 Fitzcarraldo Editions Essay Prize for Fifty Sounds.