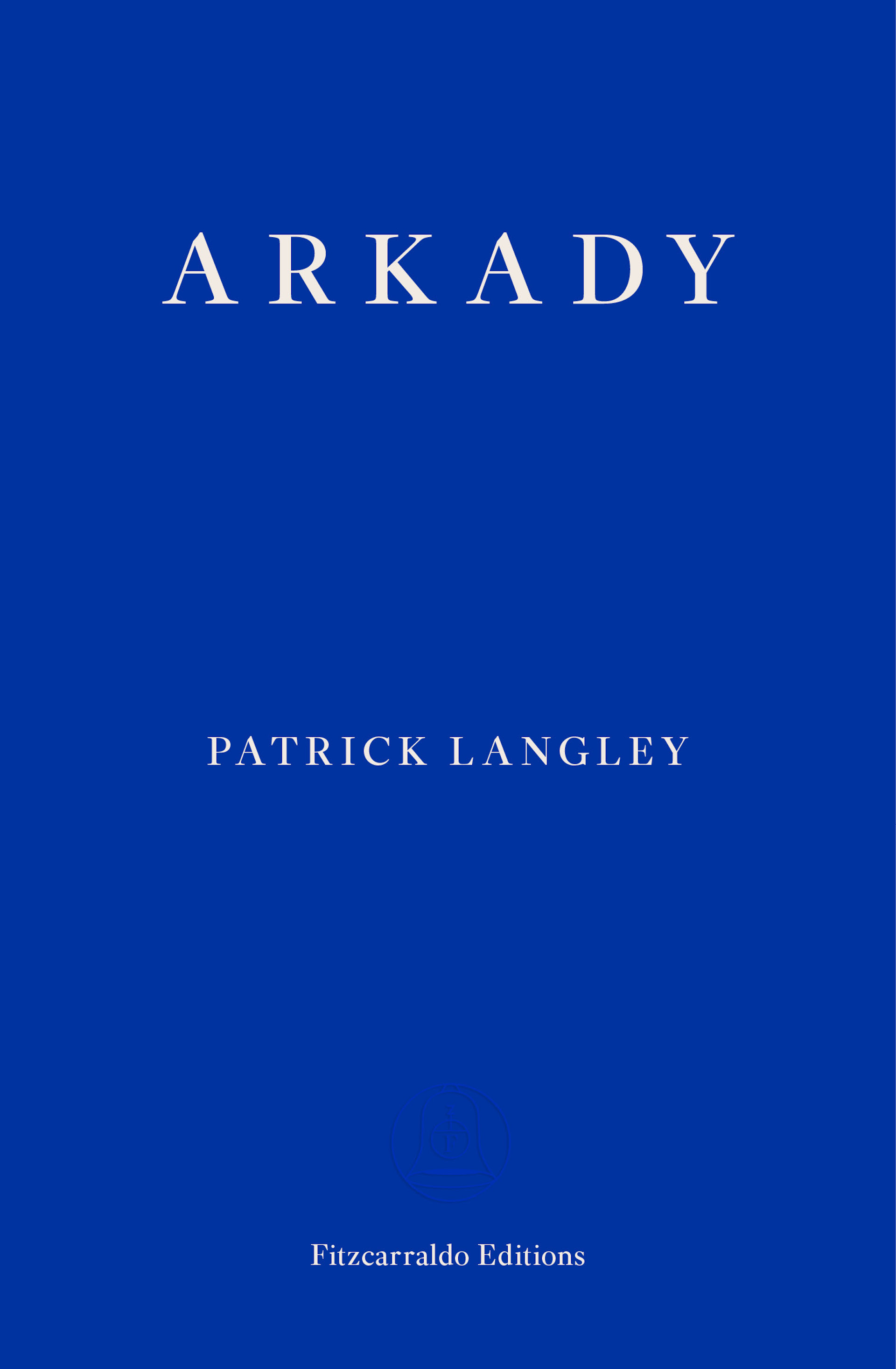 In the midst of the bitterness there was a countervailing hope, however naïve, that a time of crisis could offer an opportunity for change.

Brothers Jackson and Frank live on the margins of a big urban sprawl. From abandoned tower blocks to gleaming skyscrapers, their city is brutal, beautiful and divided. As anti-government protests erupt across the teeming metropolis, the brothers sail in search of the Red Citadel and its promise of a radical new way of life.

»ARKADY raises questions about what happens after capitalism finally collapses. ... It's difficult not to think of JG Ballard throughout, but Langley's unforgiving urban scapes also recall the sound of dubstep pioneer Burial or early pirate-station grime. The prose crackles with energy as the narrative follows the constant movement by placing the reader on a well-oiled tracking dolly, often zooming out to remind us of the bigger picture. Langley is a highly visual writer and ARKADY an assured allegorical debut about a near-future Britain that is potentially only a recession or two away.«
New Statesman

»Successfully achieving this multi-layered, anachronistic, paratextual, yet vaguely realist sci-fi polemic is quite the feat. This is a clever and ambitious novel.«
Oxonian Review

»This is a strange narrative, enriched by a poetic style of prose which gives as much time to observational detail as it does to characters and events. It is set against a backdrop of upheaval and polarisation: families are being moved out of homes, authorities are cracking down on protests, luxury flats in shiny towers are multiplying on the skyline.«
London Magazine

»Patrick Langley's debut novel ARKADY comes beautifully presented by Fitzcarraldo. What's not to like about a book where revolutionaries take over a city in the north of England?«
Guardian Summer Reads

»Though the plot remains firmly within a vice of gritty reality, the prose at times takes on a mythical quality, as man and nature coalesce in a seamless union ... These are the moments where Arcadia, that utopian idyll, feels within reach. ... Brotherly love emerges as the sweet aftertaste of the novel, precisely because Langley evokes their relationship with such verisimilitude. ... Patrick Langley is one of London's most exciting literary prospects. «
Culture Trip

»The atmospherics recall the dystopian cinematography of Blade Runner...; but despite the anomalous motif and the political theme, the book ticks along at a good pace, and when Langley isn't painting elaborate tableaux he is a brisk and engaging storyteller.«
The Irish Times

»A distinctly post-Brexit novel, ARKADY is set in an unnamed city that both is and isn't London, thick with the atmosphere of the riots of 2011, and the stricken, devastated aura of the days after the Grenfell fire. It is oblique, and bleak: it is never quite clear what has happened or is happening, what is it about our world that has finally broken or overflowed. ... But there is always a flutter of hope in the dark, and in ARKADY it dwells in the unshakeable brotherly love between the novel's two heroes, Jackson and Frank [whose] relationship is so beautifully etched ... ARKADY suggests that we'll build our own arcadias out of the dreams that haunt us, both threatening and protective.«
The Guardian

»ARKADY traces the lives of two brothers from early childhood, following their treacherous journey together through forbidding urban wastelands, towards some kind of redemption or hope. It's a gripping story, and Langley's rich language and profound empathy combine to make ARKADY an incredibly powerful novel.«
Maya Kalev, Dazed

»Langley's invented metropolis was a joy to spend time in. In my visual imagination, it looked as if it had been half-painted by L. S. Lowry and finished off by H. R. Giger. And the ambience was a little bit 'Stalker', and a little bit 'Tekkonkinkreet'. But then at the heart of it all was this complex, tender relationship between brothers, and Langley's writing - which somehow managed to be both unembellished and evocative.«
Sara Baume, author of 'A Line Made By Walking'

»ARKADY is an utopian project: not the top-down kind that never works, but the bottom-up kind that (in this case anyway) works so well it reclaims something of the world. It's hand-built, beautifully, from loose memories, salvaged people, and wild blooms of the psychogeographical sublime. Tense, vivid and humane, this novel gives us not only a dark future but also - over the horizon, past the next riverbend, through that hole in the fence - a chance of saving ourselves from it.«
Ned Beauman, author of 'Boxer, Beetle'

»Patrick Langley's ARKADY is a strange trip - luminescent, jagged and beautiful. A debut novel that twists, compels, descends and soars. I highly recommend it.«
Jenni Fagan, author of 'The Panopticon'

»I haven't been able to stop thinking about ARKADY - such a tender, hopeful tale of brotherhood and belonging, set against vividly imagined urban topographies. I haven't read anything like it in ages.«
Sophie Mackintosh, author of the 'The Water Cure'

»A gorgeous novel... A livid and visionary brotherly love story set among our ruins. I loved it.«
Max Porter, author of 'Grief Is the Thing with Feathers'

»The phrase 'Beneath the pavement, the beach' is usually used when describing our dreams of escape, from the grids of the city to something more fluid and free. In ARKADY, however, the protagonists use the power of their imagination to remake the world, and they find solace not by dreaming of another place, but by looking closer at the city itself. They reimagine its forgotten and overlooked places, such as office blocks overgrown with weeds, canals and marshes.«
Elephant

»The Romulus and Remus of a refugee nation embark upon a drift across livid cities, liberatory canals and compromised occupations in a parallel present mere millimetres from our own. Langley gives to the reader the taste of the Molotov fumes and the bloody heft of the personal-political in this propulsive, acid fable, a derive for the age of urbex. How can the orphaned subject escape the surveillance state? Read on to find out. We, also, are in Arcadia.«
Mark Blacklock, author of 'I'm Jack'

»Thick with smoky atmosphere and beautifully controlled - this is a vivid and very fine debut.«
Kevin Barry, author of 'City of Bohane'

»The details of ARKADY feel unique, even unprecedented, conveying the stark lawlessness of the riots in ways that earlier accounts have struggled with. [...] Langley doesn’t stoop to that. In ARKADY, he searches for a lexicon all his own - a precise and startling diction - and he finds it.«
Splice

»This is a strange narrative, enriched by a poetic style of prose which gives as much time to observational detail as it does to characters and events. It is set against a backdrop of upheaval and polarisation: families are being moved out of homes, authorities are cracking down on protests, luxury flats in shiny towers are multiplying on the skyline.«
The London Magazine

»Langley avoids totalizing language. You can see him scalpelling out what overserves, offloading words too bloated with connotation. […] The city's name is never mentioned, attuning readers instead to the unique texture of its hinterlands: crushed glass and asphalt, gnawed chicken bones and scrubgrass, the filthy waterways crisscrossing it in secret, another mazy layer to its labyrinth. [...] Foreign to the literary Londons of before, it's a London that feels faithful to the one I know now; one where squatters can occupy millionaires' mansions, kipping on the marble floors and unfurling antifa flags from the balconies; one where the empty lot you raved in one week is bulldozed, built over the next; one where, in spite of its weighty history, traces of habitation can vanish as quickly as if they were in water. [...] ARKADY's themes fall in step with other novels addressing the emergency of the present.«
Alex Quicho, C Magazine

Patrick Langley is a writer who lives in London. He writes about art for frieze, Art Agenda, and other publications. He is a contributing editor at The White Review. Langley has also been a runner-up for the Deborah Rogers Award for the title 'The Brothers King', an early draft of Arkady. ARKADY is his first novel.